Load More
HMD Global has finally announced its very own Flagship device to enter the race of becoming one of the top devices in 2019 first quarter. The Nokia 9 PureView is just what HMD needs to get back to the top, the device looks more premium than any other Nokia devices except for the Nokia 8 Sirocco which has a 3D curved design and a good camera but it didn’t gain much attention and it might be the first time seeing the name. The Nokia 8 Sirocco was actually designed to counter Samsung S8 at the time with the same curved screen and nice back glass design.
ADVERTISEMENT
The Nokia 9 PureView is definitely a premium device to be compared to the likes of Mi 9, Galaxy S10, Honor View 20 and other devices released in the past few months.

The design adopted is a very classic one, it comprises of both metal and glass; we have the series-6000 aluminum frame, diamond-cut chamfers with a blue anodized finish which protects the device also aside from being used to give it a very attractive back look. The frame is sandwiched by two 3D Gorilla Glass 5 which feels nice.
There is no physical fingerprint on the device just like the rest of the flagships in 2019, the in-display type of fingerprint will be part of the key specs we’ll be seeing on 2019 high-end mobile devices. We have IP67 rated water and dust resistant, no headphone jack. The rounded edges made the device appear more elegantly than other previous flagships by HMD in the past and the Nokia 9 weighs just 172g with a dimension of 158 x 75 x 8mm making it bulky and not too heavy but it feels comfortable and well packed in the hand.

It features a PureDisplay 5.99” inch p-OLED QHD+ display with 2K HD resolution. The screen is a very nice one, it produces rich colors and its black is rich. The p-OLED screen is popularly known for its color being pushed a little more and it correct, it does push the color a bit but it didn’t show much of oversaturation or oversaturated color on the Nokia 9 PureView, plus the device supports HDR 10 display which is on fleek in 2019.

The device is the world’s smartphone to be equipped/designed with the first five-camera setup which is arranged in a circular manner alongside the LED flashlight and a phase-detection auto-focus module with a single camera lens at the center which is new and way cooler than the traditional arrangements.
Nokia 9 is surely a camera-centric device, and some might wonder if the five cameras are really necessary. All cameras are 12MP with an f/1.8 aperture which is a good one because the image sensor gets more light to give natural look images. Two of the cameras are dedicated to taking care of the color on images(RGB), while the other three are to focus on monochromatic images.
According to HMD Global, the other three cameras can shoot up to 2.9 times the light of a full-color sensor and with the sensors dining together, users can get 10 times the exposure data to the photo. To conclude it, the 5 rear cameras all work together to achieve a common goal and the images are processed faster and layered in other to deliver an outstanding photo shoot. 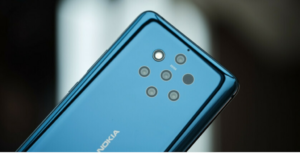 The bokeh effect found on recent or modern smartphones camera captures just 1MP depth of data, while on the other hand, the Nokia 9 PureView captures twelve times that which surpasses any other smartphones. There is a pre-loaded software on the device called the Adobe Lightroom which is also available on Google Play store and its primary function is to set a focus point on an image and blur out the rest of the image and all this can be done after the shot has been taken to match your desires and on the front is a single 20MP camera with display flashlight as usual.

What we have here is nothing we haven’t seen in 2019. The newly launched Qualcomm Snapdragon 845 chipset which is said to be the most powerful at the moment is onboard coupled with 6GB RAM to further help boost the gaming and overall performance of the device. The performance is no different from what we have on the Galaxy S10 and S10e, Xiaomi Mi 9 and other flagship featuring the high-end processor.
HMD Global actually worked with Qualcomm to achieve the Adobe Lightroom with the Snapdragon 845 processor. We have a large internal storage of 128GB which is enough even for a heavy storage user and there is always an option for expansion.
The battery number might not be a big one but it does well, its Nokia. HMD equipped the Nokia 9 PureView with 3,320mAh battery capacity which supports both fast and Qi wireless charging technology.

We have a USB-C port, a single speaker and mic to the bottom and no 3.5mm headphone port but instead, the USB-C v3.1 is being used as an audio connector, and talking about audio, on the Nokia 9 PureView is a Qualcomm aptX for super audio quality over either headphones or Bluetooth speakers.

There are no new buttons found on the device than the usual volume and power buttons which appears more stable and softer. 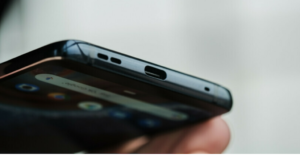 Nokia 9 PureView runs purely on Android 9 Pie which is the latest with no secondary UI and it works alongside the AI tech to better understand user’s preference. It doesn’t consume power nor slow down the device operations, plus users get software updates for good two years alongside security updates every month for the next three years which is cool.
It will be a limited product i.e. it won’t be produced in large quantity and the Nokia 9 price will range from $699 -$720 which is approximately up to 252k in Nigeria currency.

Is the device worth the price? Yes, I think it does, it doesn’t really look much like a 2019 smartphone though, it has more of 2018 specs starting with the display type with no notch nor HOLE PUNCH but aside that, it a great device.
Tags: nokia