This is the second smartphone made by Infinix mobility which features a notch display. The first was the Infinix Hot S3X.

Both devices share the same design concept from the camera features and placement to the display size and some others to be discussed below, I’ll just say the Infinix Hot 6X is the same as the Hot S3X but just some little differences and the Infinix HOT 6X price in Nigeria should be lower than the Hot S3X, but let check it out.

Infinix Hot 6X is designed with plastic which is common among all its smartphones, a dual rear camera which is placed vertically with the LED flashlight beneath them.

The top-notch screen design gives the smartphone a great look with its aspect ratio of 19:9 giving it a larger screen to body ratio. The speakers are placed at the bottom and the fingerprint sensor at the center back of the HOT 6X.

It features a 6.2-inch HD+ wide display with an IPS technology, not AMOLED this time. The display features up to 500nit brightness plus a contrast ratio of 1500:1 producing a vivid display view.

On the rear side of the Infinix HOT 6X is a vertically aligned dual camera of 13MP + 2MP, still the same with the HOT S3X camera type.

It features PDAF, portrait mode and a refocus which allows users to take shots first and perform the focus later.

Infinix HOT 6X sports an 8MP AI camera on the front with an image dimension of 2448 x 3264 and a soft flashlight which takes pretty good photo’s in low light environments but it might not be what you expected.

The device runs on a low-end Qualcomm Snapdragon 425 Quad-core processor clocked at a 1.4GHz speed. On the HOT 6X is a 2GB/3GB with an internal storage of 16GB/32GB which supports an expansion of up to 128GB using a memory card.

How is the gaming experience? well, it is equipped with  Qualcomm Adreno 308 which is a lower version but it should be fine and do expect a drag when a heavy game is being launched or played.

Infinix HOT 6X house a big battery capacity (4,000mAh) and according to Infinix Mobility, it can last up to 2-days and a 29 days standby time, well we will see to that on the battery life review later and users get no fast charging tech on this one too just like the HOT S3X.

The device runs on XOS Hummingbird based on Android v8.1 still when users can be given the Android 9.0 Pie.

Added is a fingerprint sensor at the back and a face-ID. The face ID system supports 1024 points facial recognition which makes unlocking the phone safe and the fingerprint system is further upgraded to optimize and further adjust the data taken in the background to enable a fast unlocking system. 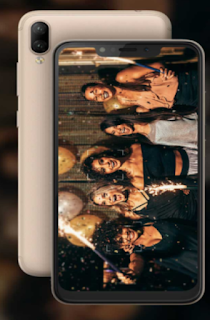