The long-awaited smartphone by Tecno Mobile has finally been launched, behold the Tecno Camon 11. On one of my recent post is the launch of Tecno Camon iClick2 in India and I said in the article that the next Tecno mobile phone in Africa will be combined with a notch screen design which they did.

Infinix Mobility has launched two smartphones (Infinix Hot S3X and Infinix Hot 6X) in Africa with a notch which are impressive but not good enough to be proud of, so all in all, we expect Tecno to give us more which we are going to find out below.

Tecno has given a whole new look to the Camon 11 and the Pro version of it, on the back is a dual rear camera which was first seen on the Phantom family which are the most expensive Tecno smartphones and now we have a dual camera on the mid-range device which is cool.

The back-cover shines with light like that of the Phantom 8 with the fingerprint scanner placed in the middle, to the front is a notch, a selfie cam and soft flashlight for selfies at nights, a 2.5D curved glass to look more elegant on the front.

Tecno Camon 11 features a full wide screen of 6.2-inches HD+ display with 19:9 aspect ratio giving the device a screen to body ratio of 87.5% plus it features up to 500 NITS brightness.

The display of the Tecno Camon  11 is quite large but it still can be operated using one hand. The device has a display resolution of 1500 x 720p. 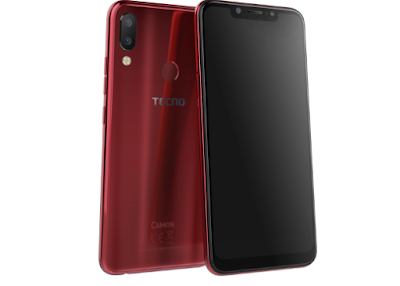 It sports a triple camera type where we have two on the back and one to the front.

To the front is a single AI 16MP selfie camera offering beautification effects with a soft light to take selfies in low light environments.

The front cam is further equipped with 4 in 1 technology and professional re-mosaic algorithm and the adjustable front flashlights to get clear and vivid shots.

This chipset of the Camon 11 is actually low one but it might still get the job done if you are not really a heavy user and that’s why Tecno mobiles made the Pro for those of us who perform heavy tasks on our mobile phones.

Additionally is a 3GB/4GB to back the processor in terms of launching heavy apps, playing games, multitasking and many more operations we perform on a daily basis, plus it is further equipped with a 32GB internal storage (not all the space is available to users) which might be small but not to worry, it supports a memory expansion of up to 256GB using a memory card 😃.

Still on the inside is an ARM Mali-G71 MP2 GPU for gaming which is still manageable for non-heavy gamers.

The Tecno Camon family is known for their camera, not big battery capacity but still, Camon 11 is powered by a 3,750mAh Lithium-Polymer battery which has a fast charging feature (MediaTek Pump Express).

It runs on the new upgraded HiOS v4.1 based on Android 8.1 Oreo. what’s new? Many functions are added to make it more fast and convenient to use the phone. e.g, the system navigation gesture to release more screen space, the quick launch apps using fingerprint, the fingerprint call recording, and the accelerated game.

Tecno has added an interesting feature to the device. Tecno Camon 11 combines human expressions with 3D virtual expressions through AR technology to create dynamic cartoon images embedded in the typewriting which is convenient to use when chatting with your family and friends.

check out this very portable sport,business, and fashion smartwatch