Samsung A9 launched with 4 back camera

The first phone with four back camera setup has finally be launched by Samsung and it called A9. Practically we know what Samsung is trying to achieve on this device, making it the world’s first smartphone with quad lens camera plus a sleek design, large display and up to the task performance.

Samsung has previously released a device in the A series which is the Samsung A7 2018 edition with triple rear camera setup earlier last month, November and the announcement and launch of the A8s with the infinity-O pinhole camera and now the A9 with four lenses.

Samsung A9 DESIGN AND DISPLAY

The phone looks really sleek on the look with a curved glossy back cover which has an ergonomic design for a comfortable grip. The design features no notch nor curved screen, just a large quality display, and the device are available in three different colors; Bubblegum Pink, Lemonade Blue, and Caviar Black.

Having an immersive view is always a thing by Samsung on either it mid-range or high-end mobile devices. We have a 6.3-inches rounded corner edge-to-edge FHD+ super AMOLED display with 2220 x 1080 pixels display resolution giving up to 393 Pixel per inch (Pixel density).

Now to the main spec of the Samsung A9, the camera. As seen above, we have a four camera lens with each of them assigned with a task, the first is an Ultra Wide Camera with 8MP FF sensor, f/2.4 aperture, 1.12µm pixel size, a field of view of up to 120° and a sensor size of 1/4.0″.  The task of this lens to let users capture shots in a more wider area.

The second is a telephoto camera with 10MP AF sensor, f/2.4 aperture, 1.0µm pixel size, 45° field of view and 1/3.9″ sensor size and its primary task is zooming, with the 2x optical zoom, users can capture an object from a distance and still get the best shot.

The third camera is the main camera with 24MP camera lens featuring an f/1.7 wide aperture which is designed to accept more light to take better shots, 0.9µm pixel size, 1/2.8″ sensor size and up to 77° Field of view.

while the last camera is a Depth Camera with 5MP FF sensor, f/2.2 aperture, 1.12µm pixel size, 1/5.0″ sensor size and up to 85° field of view and its function is to blur the camera shots background making it look like a professional level shot and it works alongside the 24MP camera.

The cameras are designed to work just fine even in low light environments and with the AI integrated on the camera, users get just what we have on the Samsung A7 which is the scene optimizer which automatically detects object or subject in the photo and then selects from nineteen different modes to give a perfect output.

The AI has really been upgraded on this device camera, users get alerted when a picture is not perfect, like a scenario where someone blinks, or the picture is blurry, or the shot is dark.  And lastly, users get a wide range of stickers and AR emoji’s, and filters.

The front is equipped with a 24MP camera lens with an f/2.0 aperture, a Pixel size of 0.9µm, the Sensor size of 1/2.8″. The lens further features a selfie focus, Wide selfie for group shots. The front snapper features a low light adaptive tech that automatically decreases noise and brings up the brightness, and adding to the Samsung A9 selfie/front camera is the AR sticker, AR Emoji, and photo stamp. 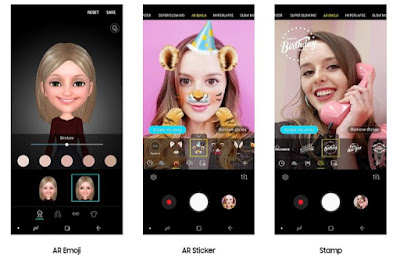 We have on the A9 a Qualcomm Snapdragon 660 Octa-core processor which is clocked at the speed of 2.2GHz and it is further coupled with 6GB/8GB RAM to speed up operations like multi-tasking, surfing the internet and playing games. On board is a 128GB internal storage as well which can be further expanded up to 512GB and it features the Qualcomm Adreno 512 GPU.

Samsung A9 POWER, OS, AND OTHER’S

A9 houses a 3,800mAh in-built battery capacity by Lithium Polymer with fast charging technology but no wireless on this one. The Type-C USB port is a plus which I would really wish all mid-range device has. It runs on Android 8.1 Oreo with Samsung UI and we have a Dolby Atmos speaker which is a good sound technology, a face unlocks system and a fast fingerprint ID that enables users to sign into websites and apps with ease for the purpose of seamless multi-tasking.

A9 supports the two social account setup, a Samsung Knox for securing folders, files, and apps, plus users get the Samsung intelligent assistance, Bixby.