Ever heard of Royole FlexPai?

As the news keeps spreading about the World’s first foldable smartphone that can be folded up to 180 degrees, well I’ll say I didn’t believe at first but rather considered it a prototype of some upcoming technology to be adapted on a tablet until October 31 when it was launched in Beijing, China.

Samsung has lately announced its own flexible smart device that can be folded in half and Royole just stole the show of being the first in the market.

Turning a tablet into a phone sounds cool to you I guess but what really happens to the screen, does it mean the screen is unbreakable? well yes plus it is highly durable and it has passed a tested stage where the screen was bent over 200,000 times, I hope that answers your question.

Now to the features of the Royole FlexPai, the device is designed to be operated as both a tablet and a mobile phone.

Royole FlexPai sports a highly flexible display which provides rich color with a high contrast ratio, wide viewing angle, and a high display resolution. It features a 7.8-inches AMOLED display, a resolution of 1920 x 1440 pixel when it unfolded with up to 24-bit color depth and a 2.5D curved glass to beautify the surface.

Added is the Royole FlexPai special Water OS which enables viewing flexible and an aspect ratio of 4:3 when expanded, 16:9 and 18:9 when folded up to be used as a mobile phone. 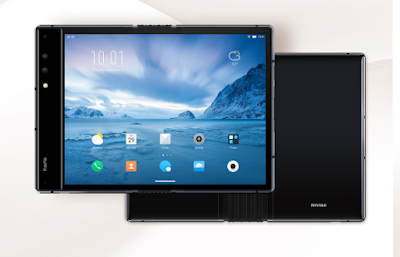 Royole FlexPai is equipped with a dual front camera of a 20MP telephoto lens which is meant to take a magnified image  + 16MP wide-angle camera and a flashlight but no rear camera. It has a dual camera mode which is great and it practically adopted to replace the back camera, what am I saying, if a user is to take a shot of an object or another person, the object will be visible on both screen when folded making it possible to take a clear shot and it nicer when it a person, how? it makes the pose more perfect just like viewing yourself in a mirror before the shot is taken.

Royole FlexPai is powered by Qualcomm next-generation Snapdragon 8 series chipset with an octa-core processor clocked at the speed of 2.8GHz which is fast and it is built on a 7nm process technology using an AI process. This device is capable of launching large apps, performing smooth multitasking operations.

Can games be enjoyed on Royole FlexPai? yes, it features the Qualcomm Adreno 640 GPU with 6GB/8GB RAM + 128GB/256GB internal storage which can be further expanded using a sdCard of up to 256GB.

Royole FlexPai POWER, OS, AND OTHERS

The devices house a 3,800mAh in-built Lithium polymer battery which can sustain the folding process with a 5V/5A Royole Ro- power adapter which makes charging faster plus 3 layers of protection.

It runs on Android v9.0 Pie with its own user interface called water OS v1.0 and according to the verge, the software seemed extremely sluggish, apps continuously opened accidentally, and the orientation kept changing randomly when one of the Royole representatives was demonstrating the folding process which means the water OS based on Android 9.0 is not that robust of an OS yet.

What happens to the edge of the folded side, well it is designed to quickly adapt a notification system where calls can be picked, messages shown just like the normal notification we have on smartphones except this happens on the edge e.t.c

Screen splitting is also supported on the full-screen mode, performing a different task on just a single screen and a fingerprint ID at the side.

The Samsung device that will have the same kind of foldable design will soon be launch so stay updated by subscribing of following Naijatech360 on facebook.