Nokia 8.1 review and price in Nigeria

Nokia has launched the Nokia 8.1 after the 7.1 on the 6th of November, 2018. The launch of the Nokia 8.1 has shown the zeal HMD has in dominating the market with awesome smart devices with great specs and less in price.

The design of the Nokia 8.1 looks premium and classy with a metal frame that ensures durability, a full screen + notch display, dual camera design, and a 2.5D Corning Gorilla curved glass body, and it is designed in Blue, Black, silver, and copper.

I’ll say this device feels more classy than some other premium smart devices like Google Pixel.

The display supports HDR10 display, it features 1:1500 contrast ratio, adaptive brightness which automatically adjust the brightness settings, and up to 96% color gamut making the display stand out among others.

Nokia has decided to make this smartphone a camera based device with the Nokia 6.1 which fails to deliver a good camera quality in low light but was ranked the best budget device in 2018, so Nokia has put a 20MP AI selfie camera with Google Lens which features motion photos built into the camera app, plus the camera can detect animal and objects seen through the camera. 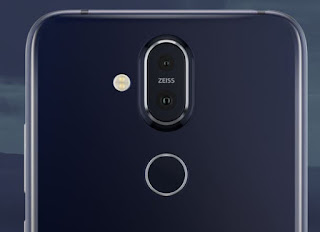 On the back side is a Carl Zeiss dual Lens camera of 12MP primary camera with a f/1.8 aperture which is great for taking shots that comes out clean, allowing more light and a 13MP secondary camera with f/2.6 to support the main camera.

The rear camera supports FHD video recording with a video resolution of 2160@30fps and 720@120fps and 4032 x 3024 pixels image dimension. A dual-toned Hi-Cri flash is located beside the cameras to further enhance shots taken in a low light environment.

Nokia 8.1 is powered by Qualcomm Snapdragon 710 which is coupled with AI operations with Octa-core clocked at the speed of 2.2GHz which is pretty fast.

Its design is based on 10nm process technology with 64-bit CPU architecture coupled with 4GB RAM/6GB LPDDR4X RAM with up to 1886MHz memory speed, a 64GB/128GB internal memory which can be expanded using memory card up to 400GB on the SIM slot.

The CPU is designed to consume less power and It is equipped with Qualcomm Adreno 616 GPU for gaming which does well better than the ones we have on the previous devices.

The battery has a standby time of 300 hours and users can enjoy a music playtime up to a day and a video playback times of 7 hours power saving and 6 hours on normal mode.

The device runs on Android 9.1 Pie fresh from the box with pre-installed updated Google apps.

The OS works efficiently with Artificial Intelligence to learn from user preferences, learning how users use their device and improving over time to serve user better, plus an adaptive battery and intuitive user interface which works with a gesture like what we have on the iPhone X family.