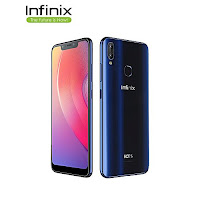 The Notch screen display design has finally been adopted by Infinix Mobile to make their loyal users have the iPhone X display. The design has been adopted by many smartphone manufacturers lately and it increasing day by day with the design being improved.

It such a good thing that Infinix made a phone with the Notch display because i’ll say so many Africans have been waiting to get their hands on a cheap smartphone with a notch display.

Design right?? The notch screen display is no more news to android users but Infinix becoming the first budget phone to design one in our very own local stores around Africa is new so let’s welcome it. The design of the device doesn’t look much like the iPhone X so it not a clone version of anything, the phone features dual rear camera design in a vertical position with it rear flash beneath both camera, it is made with plastic-like body with a glossy design which reflects light just like we see on many devices like the Umidigi Z2/Z2 Pro, Infinix Note 5 and many more.

The device features a 6.2-inch HD+ Amoled capacitive touch-screen display size with it’s screen stretching up to 80% screen to  body ratio giving it a nice look. Having a resolution of 720 x 1500 pixels and a pixel per inch density of 267.

I noticed something about the display: When a user is watching a video, i assume the display is meant/suppose to maintain the rectangular display view in the landscape mode even if u zoom out but rather, it stretches up to the top notch cutting the video which is not cool. Ulefone X, Nokia X6, Umidigi one and some other android smartphones with notch screen display does not have this problem.

Ok i admit that Infinix did not do well in this department, seriously!! a low end Qualcomm Snapdragon 430 chipset with 28nm process technology. According to my research, we have some MTK processor that are better than this and it is quite disappointing, it has  8-cores (Octa-core) processor clocked at 1.4GHz. The device features Adreno 505 GPU to make graphics look nice.

It houses a 3GB/4GB LPDDR4x RAM to support the chipset i.e enhances smooth navigation between opened apps, surfing the internet without thinking for a moment like “OMG what’s this with your face up” and launching of heavy apps and playing high games.

It is further equipped with a 32GB/64GB internal storage (ROM) .

Oh yea!! the camera, waiting for it? yea i know, but i’ll be completely honest with you, forget about the megapixel numbers, it for marketing. This device features an exclusive 16MP AI selfie with low-light camera, now, comparing the front camera to it predecessor (Infinix Hot S3) with 20MP selfie camera, i don’t think there is much different because of the technology used on Infinix Hot S3X. The front camera has ultra sensors with better pixels and Artificial intelligence tech which detects moods/facial expression, gender and age to package a beauty solution for the user.

On the rear side of the phone, we have a dual 13MP + 2MP camera with a wide angle f/2.0 aperture with LED flashlight and a bokeh effect which is great for photos.

Infinix Hot S3X houses a 4,000mAh Li-Polymer battery capacity which is non-removable. it features a quick charge technology of 2A to gain more battery life within a short period of time. i’m impress with this but i noticed even on their website infinixmobility.com  it says the battery can last 2 days on average usage.

The device runs on Android 8.1 Oreo but not stock i.e it has a customised user interface XOS which is fast, light, stable and power saving. The XOS is fully optimized to integrate the notch design for a perfect screen outlook.

It’s true that the device charges faster(Quick charge technology [2A])but i have a problem with the power adapter, it doesn’t charge fast.The phone does not come with a fast charger which is disappointing.

It says “Your face is your key” cool right?? yea, it has a face unlock system just like every other new smartphone we’ve seen so far plus a fingerprint ID unlock and other security systems that we are use to.