Huawei MateBook X Pro is an all screen laptop with up to 91% screen to body ratio, giving users more a larger display view. This is the latest device in the laptop category by Huawei this year.

Huawei MateBook X Pro features an ultra slim design with tiny bezels to the top, and both sides and a little big one to the bottom. The device weighs just 1.33kg which I consider light and 14.6mm thick which makes it portable to carry about.

Huawei MateBook X Pro sports a 13.9-inch big display with a resolution of 3000 x 2000 which has up to 260 pixels per inch. The display features a 100% sRGB color gamut, 450 nits brightness, 1500:1 contrast ratio and users can suitably enjoy a 4K video. The display is further protected by a Corning Gorilla glass and it supports a 10 point touch-screen made with an anti-fingerprint coating to enable zooming and scrolling more easier.

The MateBook X Pro is powered by the 8th Generation Intel Core i7-8550U/core i5-8250U quad-core processor clocked at the speed of 1.8GHz and up to 4.0GHz clocked speed plus NVIDIA GeForce MX150 with 2GB GDDR5/Intel UHD Graphics 620, users can get the best gaming experience and a superb operation by having fast image processing, smooth video editing, and e.t.c, taken that the  processor is faster and higher in overall performance than its predecessor.

Huawei MateBook X Pro houses a 57.4 watt-hour Li-Polymer battery capacity which is non-removable, and it can last up to 12 hours of video playback.

The camera got no space at the top of the screen but instead, it was integrated on the keyboard for privacy sake according to HUAWEI, the camera only pops up when it needed like what we have on smartphones like VIVO NEX & OPPO FIND X. The camera is just a 1MP camera when I was really expecting a 5MP. 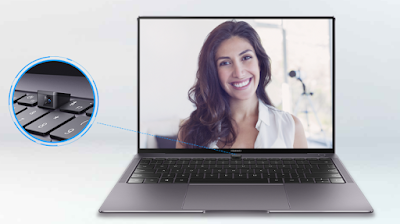 MateBook runs on Windows 10 Home basic version, features BT 4.1 which is compatible with 3.0 and 2.1 + EDR, a Dolby Atmos Sound System with quad digital microphones and quad speakers, a One-touch power button with an optimized fingerprint sensor to fasten up login time and it also makes it safer and user-friendly.

Ports include 3.5mm audio jack port, two Thunderbolt USB type-C port to the left side and a USB TYPE-A with a maximum output of 5V/2A to the right side. MateBook X Pro comes pre-installed with Huawei share software which makes files transfer smooth and faster than Bluetooth by using a wireless mechanism.