It is the era of full-screen smartphones in 2019, with higher camera features, improved performance and new techs being introduced.

Huawei sub-brand, the Honor, has launched the first ever new smartphone into the markets with lots of features to offer. The device is said to feature a whole new type of display called the “HOLE PUNCH” which Samsung called the Infinity-O display which is to be featured on the new S10 and Note 10 devices to be launched in Feb.

VIEW 20 is a whole new type of device from Honor starting from the design to the display and camera features which is on a whole new level, and the AI is an improved one a new scale with a performance better than any other smartphone ever produced by Honor, making the device a very powerful flagship to start off within 2019.

The Honor VIEW 20 is beautifully crafted with a high standard build quality, a full-screen display with tiny bezels to left, top and right, a well-placed HOLE PUNCH on the screen which houses the selfie camera. We’ve seen a lot of smartphones last year looking all the same, either at the entry level, mid-range or the big guys, while some are trying their best to give their smartphones a unique look to make them stand out in the market.

The design of the HONOR VIEW 20 is nothing we’ve seen before. The device is produced in colors that please the eyes and a very unique back glass cover design which has a chevron pattern that changes the way it looks depending on how light hits it.

The HONOR VIEW 20 features tempered curved glass on both the front and back making the device less slippery and comfortable to hold plus it makes the phone elegant and still modern. 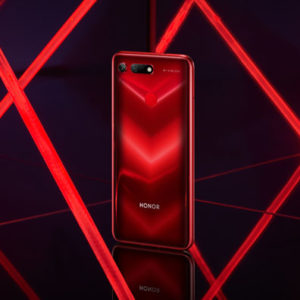 There has been a lot going on over the past few months (2018) with the notch after Apple launched the ultimate iPhone X and we’ve seen so many users who are not a fan of the display design which main aim was to increase the screen to body ratio.  Well congrats to those users, 2019 will be all about the “HOLE PUNCH” which is a good alternative to the notch.

The display cut-out on the HONOR VIEW 20 is the first ever and it is situated in the topmost left corner of the device screen with the front cam placed inside it. I can proudly say the cut-out was a big success because of its simplicity and portability and I can boldly say I prefer it to the notch and pop up camera device type that was designed to avoid the notch and more smartphones are already preparing their HOLE PUNCH devices for launch.

Worried about the cut-out affecting your gaming, movie or reading experience? Well, interested users shouldn’t bother themselves with that because it doesn’t create a fuse since it the hole is a small one, the cut-out moves the carrier logo and other things to be display closer to it to the right, and am not saying it 100%, because some apps might not properly fit in and users might lose tiny piece of content in that area but it rare and there is a solution to solve that totally by just turning on  a feature that hides the HOLE PUNCH just like what we have on some notch screen devices.

The device sports a 6.4-inch large display with 19.3:9 aspect ratio, 2310 x 1080p resolution which produces high-quality images, vibrant colors, and its brightness are much ok outdoors. 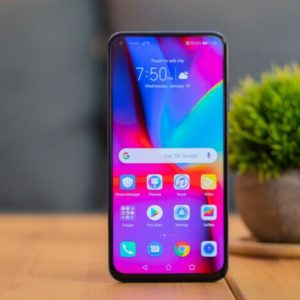 This device may have up to 90% new camera development on smartphones. Honor designed the VIEW 20 with a triple camera (one front + dual back). The front features a 25MP selfie shooter with f/2.0 wide-angle aperture and 78° field of view, the camera features a beauty mode, portrait mode. The results of the front snapper look detailed with nice color reproduction, sharp and rich color images and users get to zoom and crop their shots without worrying about reducing the image details. 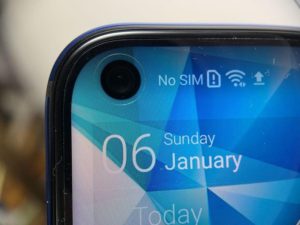 While on the back is a first of its kind 48MP SONY new IMX586 camera sensor with f/1.8 which is pretty awesome for a flagship in 2019. The camera f-number allows more light into the image sensor to produce a sharper, vivid and vibrant image plus it is supported with a 3D TOF (Time of Flight) camera sensor.

What’s the job of the secondary rear camera? Well the 3D TOF sensor focus mainly on portrait shot, it enhances portrait photos alongside the ability to perform 3D scanning, 3D skeletal tracking, and real-time motion capture which can be used to play games by placing the phone right in front of you with the back camera facing you after connecting it to a bigger screen as seen below.

There is also a new feature rolling out on the device called “Shaping”, this particular camera feature of Honor view 20 can be found when in portrait mode or recording. This new tech allows users to shape themselves by increasing the size of a body part or decreasing it to look skinnier.

The rear 48MP camera lens is a very good one, though it might sound big to you but don’t expect a very high digital camera lens image quality but it awesome in both the day and night with the of the powerful Kirin 980 AI chipset. The camera is set to 12MP by default which can be changed to the full resolution (48MP) in the camera settings which delivers vibrant, bright and sharp images with the help of an image processing technique called pixel-binning which combines 4 pixels of an image info,  But note that, when it is set to shot with 48MP, users do not have an option to use the digital zoom, but not to worry people, either you are shooting with 12MP or 48MP, you get a quality image with nice color reproduction on daily use , plus it also has the ability to shoot a video at 960fps slow motion at 720p which is great to have.

The overall camera performance can be rated 88% (front and back) with the natural skin tone feature, AIS (Artificial image stabilization), AI HDR, dual ISP and NPU, and the 3D TOF sensor is incredible.

The camera performs quite nice also in a low light environment with either the AI on or off but it much better with the AI switched one, it produces a brighter image, lesser noise, more color accuracy, and an improved dynamic range.

This is a flagship device so I guess fans taste should be met in this category to further top the cool camera ability. So the VIEW 20 features the highest level of HUAWEI processor, the Kirin 980 AI chipset with 7nm process technology which was also featured on the coolest HUAWEI flagship, the MATE 20 PRO.

The device is further equipped with 6GB/8GB RAM which is more than enough for a flagship phone, it performs as expected with a high benchmark score and talking about real-time performance, launching of apps is smooth, alongside multitasking, surfing the web, watching a high quality downloaded video, plus the UI is smooth with clean navigation system and gestures.

The gaming experience on this device should be highly rated with an upgraded GPU (46%) with up to 178% power efficiency upgrade to support it. Power is another important aspect of a smartphone that we have to always consider because most of these flagship devices do not have a high battery performance level but let’s take a look at this.

VIEW 20 houses a 4,000mAH non-removable battery capacity with 4.5V/5A super-charge which can juice up the device up to 55% within 30min which is really interesting but not the fastest charging technology.

I’d say the battery performance bags a good score with up to 15 hours of watching videos, 25 hours on 3G calls, and 130 hours of music playback and we have no wireless support on this one which is a minus for a high-end smartphone in 2019.

Honor introduced a new tech that enhances gaming which is called “The Nine”, it is a liquid cooling system, and according to Honor, “The innovative S-shaped heat pipe cools a wide area of heat to guarantee sustained peak gaming performance.”

The cooling system is said to be connected to the AI chipset, camera, TOF (Time of flight) sensor, battery, and other hardware devices that produce heat for temperature regularization.

Honor also went further by incorporating the new hardware with an AI monitor to predict overheating and serve users in real time with the help of Magic OS.

Honor has added another antenna to make it a triple antenna wi-fi which is aim at increasing the wi-fi reception for the purpose of serving users a high gaming experience and talking about gaming, the GPU Turbo v2.0 is up to the task with the support of the Kirin 980 AI chipset.

The new antenna is located beneath the glass on the front side to better increase reception when in landscape mode, while the other native two antennae are situated on the left near the HOLE PUNCH and the last near the battery indicator on the right side.

It nice to see a 3.5mm audio headphone jack on a flagship in 2019, a lot of smartphone company have abandoned the traditional headphone jack, especially apple.

We have a USB Type-C at the bottom, a small mic, single speaker, the volume rockers are at their normal spot on the right while the other side houses the SIM/memory slot, fingerprint sensor at the rear side which is well placed.

The EMUI has always been my favorite, it is stylish, clean with nice features but HONOR VIEW 20 runs on Magic OS v2.0 based on Android 9.0 Pie. The Magic OS is not really different from the EMUI v9 featured on the HONOR MAGIC 2 released late last year but in other to have their own feel and look, they had to tweak the original EMUI to create the MAGIC OS.

The OS interface looks so much like iOS, from the multitask panel to the shape of the app’s icon. There is a one hand mode, up to four different navigation option, some very useful pre-installed apps like health that can use to monitor heart rate, analyze sleep and perform a simple exercise.

How To Read Deleted Whatsapp Messages and images