Load More
ADVERTISEMENT
Being just a few days away from 2019, manufacturers in the mobile industry are ramping up to release their new and improved models. Cubot is also releasing their first model in January, the Cubot X19.
The X Series is the best selling and most popular devices of the company as phones like X18 and X18 Plus were a big hit in 2018 mostly thanks to their good performance and very low price. So, what does Cubot X19 bring?
The X19 will be the first device of the Chinese manufacturer to feature the Android 9 Pie OS, the latest iteration of Google’s mobile OS that competes with iOS in terms of fluidity and resource management. In the meantime, the new UI and icons offer a new visual experience alongside a low power consumption to offer a better user experience.

Cubot X19 phone arrives in plastic and a metal body design with a body dimension of 155.06 x 74.67 x 9.55mm and the weight specification is not justified, it comes in two design colors; black and gradient colors with the back cover reflecting with light like what we’ve seen on the Tecno camon 11 Pro. we have a fingerprint sensor located at the rear side, a dual back camera plus a flash beneath them and finally a logo at the bottom of the cover.
The front design has no notch display, just a large screen with narrow bezels to both right and left a thick one to the top and bottom (18:9 aspect ratio).

Cubot X19 features a 5.93- inches FHD+ IPS display which is further protected by a 2.5D curved Corning Gorilla Glass for scratch and drop resistant. The device has 2160 x 1080p  of screen resolution which results in up to 408 PPI (display pixel density) which is a nice one for a 2019 cheap smartphones. Other features include a, 78.6% screen to body ratio, 16M colors, color saturation(NTSC) up to 88%, high contrast 1300:1 and a notification Light: Blue, green, and red. 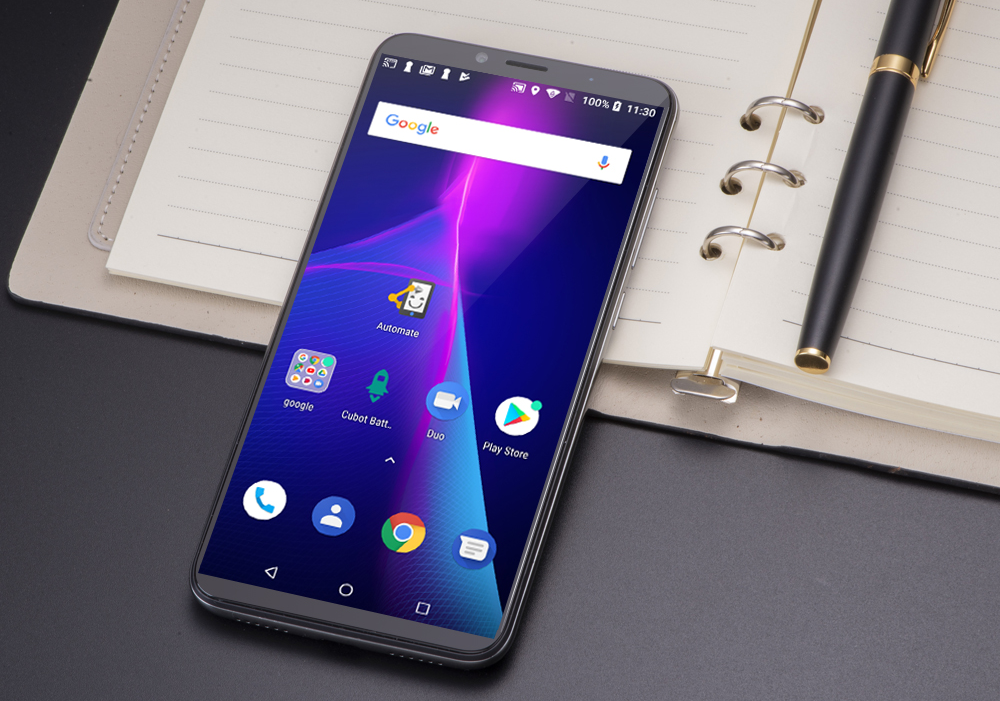 There is dual rear camera setup of 16MP + 2MP which serves as the primary lens with f/2.0 aperture, 5P lens, an LED 1A flash-light, PDAF fast focus which is handled by the 2MP to deliver stunning photos and finally, it supports full HD video recording at 1080p.
The front is equipped with 8 MP camera lens with an f/2.8 aperture with 4P lens and a fixed focus, plus it comes without a flashlight.
The camera features are as follows: Geo-tagging, touch-focus, face detection, panorama, auto-focus, HDR, self-timer, white balancing, digital zooming, ISO setting, Macro mode, scene mode, OIS(Optical image stabilization), and e.t.c.

Cubot X19 is powered by a mid-range chipset, MediaTek Helio P23 with an Octa-core processor with a clocked speed of 2.5GHz which does a good job of drawing the Android Oreo interface, as well as demanding games at low graphics settings plus it is built on a 16nm process technology and since the device is equipped with such a low-end chipset, it is supported by a 4GB of RAM and a MaliG71 MP2 graphics adapter to better optimize graphics performance.
The chipset is not AI oriented but it does contribute to low power consumption up to 25% compared to the likes of X18 and the 2018 devices by Cubot.
The device houses a 4,000mAh battery capacity which is non-removable. There is no fast charge supported on the device, taking up to 3hrs to fully charge which is a minus for some users but it does last long wit up to 8 hours surfing the web, 30hrs listening to music, 6 hrs of video playback time and 10hrs of talk time.

It is equipped with a 64GB ROM allocated for data storage and the volume can hardly be called small, but for some owners of large-scale collections of music, video, and applications, there is a slot for MicroSD cards can take up to 128GB.
There are six sensors in the phone which includes; an accelerometer, proximity sensor, light sensor, compass, gyroscope, magnet, and a fingerprint sensor.
On the top of X19 is an earphone jack (3,5mm), a USB Type-C v2.0 to the bottom alongside a small tiny mic, and a single speaker.

Cubot X19 SOFTWARE AND OTHERS

The Cubot X19 also runs purely on Android OS v8.1 Oreo which will receive the latest Android OS updates soon. The phone is designed to house a two Nano SIM or a SIM + MicroSD card, plus it supports three network mode; 2G/32/4G LTE.