by Matthew John Alex
in Mobile
1

The back design might be similar to what we’ve seen on a device in 2018, the gaming smartphone by Xiaomi “the BLACK SHARK”.

Let’s just say Blackview re-designed the device to fit into the mid-range smartphone market which is pretty cool just like we have some device made as an alternative to the apple X devices.

The design of the Blackview BV5500 looks a lot like the Xiaomi Black Shark on the back and trust me when I say the device is a tough one.

Blackview BV5500 is made to have a long life span with water and dust resistant alongside the ability to withstand drops, high temperatures, and vibration.

The device can withstand a drop from 1.5M, it features IP68 certified water resistant which can go as low as 1.5M underwater and a high level of dust resistant. Still, on the design, the BV5500 is covered with an industrial rubber similar to the kind used to make cars tires which is reliable, tough and also impervious to water and dust.

The device is said to survive in both an extreme cold and hot environment where a human can possibly live. 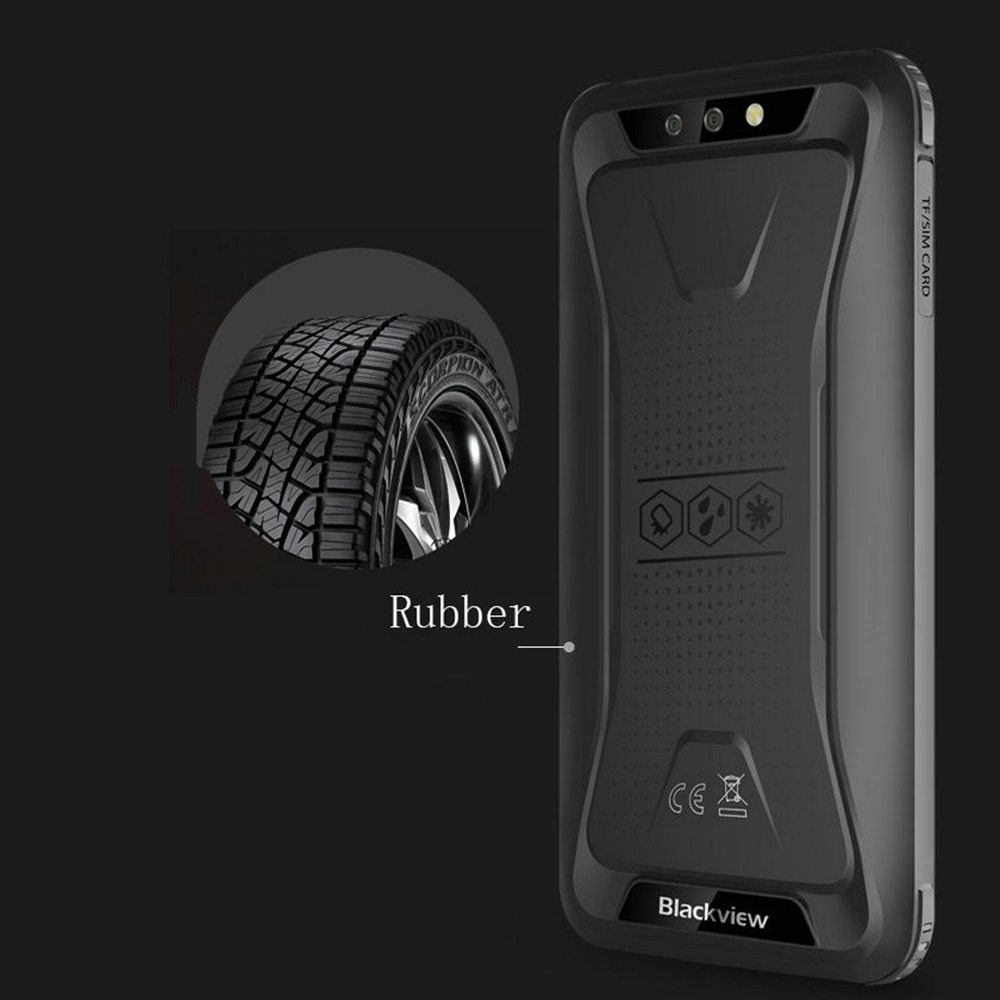 Blackview BV5500 sports a 5.5-inches HD+ IPS display with 1440 x 720p display resolution with up to 24-bit color depth which I think should have been left off in 2018 but I wouldn’t judge them considering the price of the Blackview BV5500.

The device has a total pixel density of ~293 PPI (pixel per inch) and the display is protected using a Corning Gorilla Glass 3 which is scratch resistant.

The display is not that bad just that it gets light out in a sunny environment but it pretty awesome in a normal light environment, showing vivid color and quite a little darker black but not as an AMOLED panel black display.

BV5500 display screen is not that large with just  68% screen to body ratio.

As usual, the days of the single camera is fading away and as of 2018, we have series of smartphones with four cameras and up to 5 camera setup in total.

We have the likes of Samsung A9, Lenovo Z5s, Huawei mate 20 Pro, Samsung A7 and many more and we hope to see photography on the next level on smartphones.

Back to BV5500, we have a single 8MP SONY IMX134 Exmor RS CMOS camera sensor with f/2.0 aperture which will in no way be up to what you might expect because of it f-number.

The aperture size will not take enough light into the image sensor to deliver high-quality shots but it SONY sensor, you never can tell.

it is further supported with a secondary 0.3MP camera with f/2.4 aperture and finally, a dual-LED flashlight to light up your shots in dark environments.

The front is equipped with a single 5MP camera with f/2.8 aperture and no flashlight.

Blackview BV5500 is powered by a low-end chipset by MediaTek, MT6580P Quad-core processor clocked at the speed of 1.3GHz with 28nm process technology.

It is equipped with 2GB of RAM with 533MHz memory speed and the GPU might not be the best, but it does well for a budget device at its price, with ARM Mali-400 MP2 with 2-cores, I think a low-end user should be good with this.

It has a standby time of 480hrs, 15hrs of gaming, 14ohrs of music playback time and 13hrs video playback time.

NB: This device is a cheap product by Blackview and I would not advise it for high-end mobile users.

Coming over to this section, we have a 16GB internal memory which can be further expanded using a memory card up to 32GB and it supports sensors like proximity sensor, light sensor, compass, accelerometer and we have no fingerprint on this one.

we have a 3.5mm audio headphone jack, a loudspeaker, and a mic, but am amazed by the Type-C USB v2.0 on this device which Huawei should have employed on the Y9 2019 and on Tecno’s Camon 11 Pro.

Blackview BV5500 OS AND OTHERS

Blackview BV5500  is a small budget device which is priced at just $89 which is equivalent to N31,000 Nigerian currency. it a rugged cheap smartphone, so I think it worth the price and everything, drop your comment below and let us know what you think abt the Blackview BV5500. Thank You for reading.

So there you have it, the Xiaomi Redmi Note 11. You

All things considered, we believe the Oraimo FreePods Pro is a

Another downside is there is no wireless charging. Choosing between the
No Result
View All Result